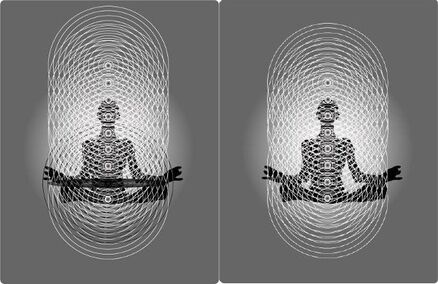 
But what is the Fragmentary Body?


In Sol Luckman’s books Conscious Healing and Pontentiate Your DNA he describes it as thus, “…the fragmentary body , which is associated with the second bioenergy field from the bottom and related to the sex chakra, constitutes an ener-genetic disruption that allows us to take on parasites — physical ones, etheric “entities,” and even “parasitic” people.”


Sol determined there to be 9 bioenergy fields/chakras. Where it falls apart for us humans is in the second field/chakra, ironically the sex chakra, and if anything is going to mess up us humans, it usually comes down to sex. If you take note in the figure on the left, there are 9 energy centers that are radiating outwards. This constitutes the Auric fields. As the bioenergy fields radiate outwards they overlap creating sacred geometrical patterns. That is, until you get down to the second energy center located at the sex chakra (just below the belly button). Sol noted how the auric field radiated in a different direction, flattened or fallen over, causing a disruption in the interconnection of the energy fields. A virtual view of “The Fall” from eating the forbidden fruit.  The Root Chakra or 1st bioenergy center is cut off from a smooth continuous flow to the upper centers/chakras. This 2nd energy center is what he has called the Fragmentary Body, where the body is fragmented or separated from the upper levels.


After Potentiation at about the 5 month mark, he noted this fragmentary body flips up, righting itself allowing for the free flow of the auric fields once again. The 9th energy center merges with the second creating 8 (eight) centers. 8 (Eight) being the infinity sign and signaling a free flow is apropos for what he calls the “Sealing” of the fragmentary body.

He states, “While I make no medical claims as to a causal relationship, “sealing” the Fragmentary Body…often appears to “squeeze out” all types of parasites…”

In essence, with the second chakra/bioenergy center righting itself, essentially  parasites and other toxins that have weakened the body to allow parasites to not only enter but proliferate are virtually “squeezed out.”  The infinity circuit is established forming a closed system that does not allow re-entry of parasites and potentially closing off entry to other pathogens as well. Those that are in the system initially are weakened and squeezed out over the potentiation process, hence the individual experiences a detoxification.

Articulation comes in at this point.

Many new potentials are related directly to the potent life energy of the second bioenergy field, the corresponding chakra, and the associated organs: the oral and reproductive systems. This life force, which is a concentrated form of bioenergy, has been called kundalini.

Kundalini is the individual’s own “life-wave” of torsion energy. This energy is pure universal creative consciousness placed in the individual at conception.

In Vedic teachings, kundalini is considered the highest evolutionary force humans possess with the power to unfold our full bio-spiritual potential when awakened.

To clarify a point for those familiar with the metaphysical tradition of India, kundalini is a primal energy that sits atop the first chakra, serpentlike and mostly dormant because of the energy disruption constituted by the Fragmentary Body just above it.

The key to raising your kundalini without forcing things and hurting yourself lies in the second chakra—which when “sealed,” naturally begins to bridge kundalini at its font with the higher bioenergy centers.

Articulation activates this life-wave at the genetic and cellular levels, providing a constant bioenergy supply for creativity in all areas—including artistic expression, interpersonal communication, healthy sexuality, and rebuilding through diet and exercise.

Many people who feel they have become “stuck” in some aspect of their Potentiation report being propelled forward again in their healing and transformation following Articulation.

This makes sense because with a new bioenergy matrix (with no energy disruption or leakage in the form of the Fragmentary Body) in place after sealing, the body, mind and spirit begin to crave the evolutionary energy that Articulation activates.

Since the Fragmentary Body has been sealed through Potentiation, the stimulation of kundalini through Articulation is safe, gentle, and continuous.

The sealing of the Fragmentary Body that occurs in Potentiation, followed by activation of the former Fragmentary Body in Articulation, makes possible further healing—including the profound level of emotional transformation that often occurs during Elucidation.

If you would like to experience Articulation, I have undergone the training to be able to perform this for you. Much like Potentiation, it is a 20-30 minute session.
Articulation